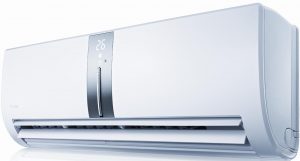 Consist of one outside and one internal units. Have a number of advantages among which there is a high performance, the low level of noise, freedom of choice of the location and type of the internal unit. Last happen wall, cartridge, channel, floor, ceiling, columned. Quite often same internal unit can be set both in floor, and in ceiling situation.

In the presence more than one internal unit, the Split system turns into multi-Split-system. As a rule, such air conditioners have from two to four (in rare instances of five) internal units of wall type, however multisystems sometimes meet internal units of channel, cartridge, floor, ceiling type or the combining units of different types. The main advantage of multisplit-systems in comparison with normal split systems — reduction of number of external units that allows to save architectural appearance of buildings. 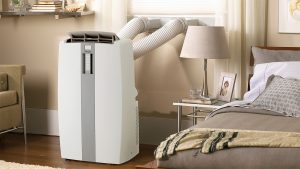 The mobile monoblocks connected to the street a flexible corrugated hose. Usually he is brought in a window leaf, the slightly opened window or a door.

All above-mentioned climatic systems, except for window, aren’t connected by air to the environment. And it means that you should or provide separate affluent ventilating installation, or to air location by means of windows, being reconciled with such inconveniences as dust, poplar down, exhaust gases and constant drafts. The following climatic systems allow to solve this problem:

The minicentral air conditioner is big a Split system which internal unit processes air for all apartment or office in general, and distributes it on certain rooms by means of system of air ducts. It can also give outside air, clear it and dogrevat to indoor temperature in winter time. Such system is, as a rule, installed behind a false ceiling, and air is distributed through decorative grids which appearance it is easy to coordinate to design of locations.

Chiller — the water-cooling machine. Is a key node of system of the central air conditioning. One such aggregate through system of fenkoil can cool huge office buildings.

Fan coil — both on appearance, and on the device fan coil very much remind internal units a Split systems. Only as “the external unit” for fan coil the water-cooling machine — a chiller appears, and instead of a freon water is used. In the presence of the boiler or a chiller with the thermal pump the system of fan coil can be used also for heating.

The central conditioning — the central air conditioning systems are located out of the serviced locations and condition one big location, several zones of location or it is a lot of separate locations. Are supplied from the outside with the cold (delivered by cold water or coolant), heat (brought by hot water, steam or an electricity) and an electricity for the drive of electric heaters, fans, pumps and so forth.